Q&A: What to Expect in Congress

Congressional Debate (formerly known as Student Congress) is a mix of debate elements (topics, legislation, questioning) and speech elements (delivering speeches and role-playing). Students who do Congressional debate write their own legislation, give speeches on their bills and other bills up for debate, and ask/answer questions, all before giving a final vote on the matter at hand.

Chambers size typically ranges between 10-20 students, and knowledge of basic parliamentary procedure goes along with mastering this activity. Typically, legislation packets are released in time for students to prepare for what might be debated and how they can give speeches and ask questions on them.

From the National Speech and Debate Association:

A simulation of the U.S. legislative process in the Senate and the House, students generate a series of bills and resolutions for debate in Congressional Debate. Debaters (also referred to as Senators and Representatives) alternate delivering speeches for and against the topic in a group setting. An elected student serves as a presiding officer to ensure debate flows smoothly. Students are assessed on their research, argumentation, and delivery skills, as well as their knowledge and use of parliamentary procedure.

Students who do Congressional Debate are typically interested in learning about issues that are significant to the legislative process within the United States. Students are exposed to a deeper application of Robert’s Rules of Parliamentary Procedure. Students must prepare for debate on numerous topics in any given competition and be able to extend a long-lasting debate with unique and fresh ideas, as well as by refuting previous speakers on a specific topic. 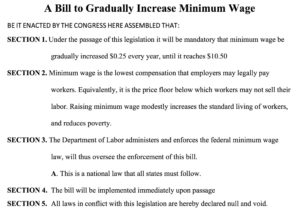